Ask Us Any Question - Get your Free 30 Minute Consultation Today!

Raising money from a VC is an important milestone for every company and should be a reason for celebration.

However, VCs will always have the advantage of experience over entrepreneurs, as for most entrepreneurs this will be the first time they are negotiating a term sheet, while for the venture capitalists it will be one of many dozens that they have negotiated such document. Due to this gap, it is important to make sure not to find yourself on the losing end of a disadvantageous contract. To place yourself in the best position, it is important to understand this important document and what rights and obligations exist in it and the implications on the company.

So, what is really a VC term sheet? It is a formal, but non-binding, document that briefly lays out the initial agreement reached between an entrepreneur and a venture capitalist. It has multiple provisions, written in a very complicated legal way that for many entrepreneurs is not very clear. Below, we will attempt to simplify and bring some sense to it.

In a typical VC investment there are many legal documents that are used as part of the round. While many of such documents include ancillary documents such as borad of directors and shareholders resolutions, share certificate affidavits, legal opinion, and other documents, there are, however, three main documents that govern any VC investment. The COI (certificate of incorporation), the SPA (Stock Purchase Agreement) and the IRA (Investors Rights Agreement). The term sheet is the starting point for these documents as it contains the most important business agreements which will later be incorporated into these documents. This is why it is very important to have a good understanding of these documents and an expert advisor (lawyer or consultant) to support you during your negotiations. 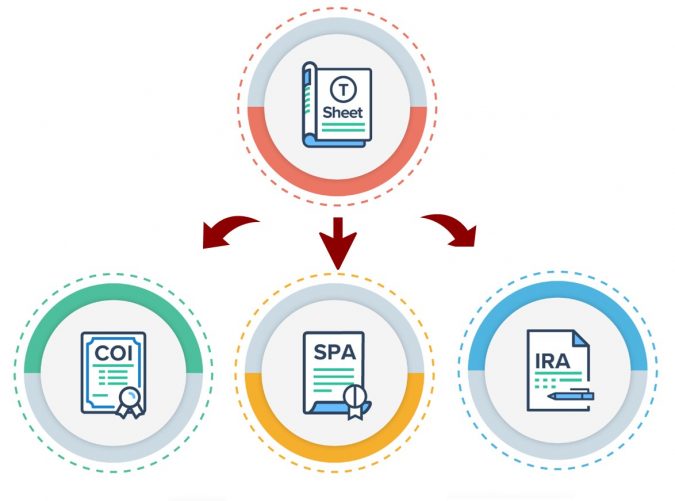 Also known as the Articles of Incorporation or a “charter,” this is the founding document that establishes and governs the a corporation. The Certificate of Incorporation contains information about the name and purpose of the corporation, the authorized share capital and the rights and the voting and economic rights and preferences of each class or series of stock, structure of board of directors, and how decisions in the company are made (“protective provisions”).

The goal of the Stock Purchase Agreement is primarily to document the investment transaction. In nature it is an ad-hoc document that governs a specific moment in the life of the company (unlike the COI which governs the ongoing activities of the company). In the SPA there is information about the financial elements of the deal (number of share issued, price per share, invested amount), the mechanics of closing the deal (how money is transferred, where, upon what conditions etc.) representations and warranties of both the company and the investors, and the liabilities taken by company (mainly indemnity obligation for breach of representations and for compensating investors for for loss they suffered as a result).

An investor rights agreement (IRA) is a form of agreement that can cover many different subjects. The main reason for this agreement is to protect and secure cetain rights when  investors making an investment in a closely held corporation, especially where the amount of the investment only amounts to a minority interest in the company.The most common rights covered in an IRA are information rights (i.e., the rights to receive financial information of the company) , registration rights (rights to force the company to register investors’ shares for public offering, therefore allowing for more liquidity of the shares to investors), contractual “rights of first offer” or “preemptive” rights (i.e., the right to purchase securities in subsequent equity financings conducted by the Company), and various post-closing covenants of the company.

Price reflects the price per share an investor would pay to own one share in your company. It is simply a function of the pre money valuation of the company, divided by the total number of shares in the company on a fully diluted basis. The pre-money valuation is the valuation of the company prior to the Investment. The number of shares outstanding or “fully-diluted” number is often a subject of negotiation. As noted in our Negotiating Valuation Strategy page, the “Pre Money” definition can be tricky and investors often use an increase of the option pool, prior to the investment round, as a way to effectively reduce pre-money valuation through the back door.

Perhaps the most important right in the term sheet for investors. The liquidation preference sets a return hurdle priority for the new investors over the common stock holders (and any junior preferred stock) such that any proceeds that are available for distribution in the company are paid to anyone, they first need to serve the return hurdle. This in principal what liquidation preference is, however, as noted in our Exit Waterfall Analysis page There are variations of liquidation preference structures, so it is critical to understand them very well, as the implication on the returns to the common stock holders can vary greatly from one structure to another.

Any issuance of new shares in the company has a dilutive effect for the existing shareholders. This dilution is a legitimate dilution necessary for raising capital to fund the operations of the company. However, a new investment in the company in a valuation that is lower than the previous investment (“Down Round“)  has a greater dilutive effect simply because the price per share is lower, and new investors receive more shares for their investment than previous investors for the same invested capital. VCs typically require protection against such event either by issuing them additional shares or, much more commonly, lowering the conversion price of their existing preferred shares so that each preferred share can convert into more common shares. This adjustment to conversion ratio is called “Anti Dilution Protection“. Broadly speaking there are two forms of protections:

A Full Ratchet Anti Dilution Protection – Full ratchet anti-dilution protection gives the original investor rights to that number of shares of common stock as if such investor paid the current round’s lower price. The adjustment happens by reducing conversion price will be reduced to the price at which the new shares are issued.

A Weighted Average Anti Dilution Protection – The weighted average approach to anti-dilution is more moderate and reasonable, and better for the founder, than full ratchet. Unlike full ratchet, weighted average employs a formula that takes into account not only the share price of the new issuance, but also the number of shares issued, so that if only a small number of shares are issued in the new round, the adjustment to the conversion price is also small.

As noted on our Negotiating Valuation Strategy page the size of the option plan pool is often a point of negotiation in a financing. Investors typically insist that a stock option plan with sufficient options reserved in the pool be put in place in order to attract and retain employees. This pool of shares often is factored into the pre-investment cap table when arriving at the price per share of preferred stock  to be paid by the investors. This way, investors are not diluted by future grants under the plan, only the pre-existing stockholders and the founders are diluted.

The concept of a “pay-to-play” provision is that current investors are required to participate in future financings, ratably to their ownership percentage in the business, in order to retain any preferential rights available to them such as anti-dilution or other rights. This provision is designed to encourage the participation of existing investors in a subsequent financing round, especially during challenging times when an incentive is most needed. Investors that fail to participate to their full pro-rata percentage of the financing are penalized by losing certain rights with respect to their existing preferred stock.

Investors often will require that any shareholder that receive a after receiving a bona fide offer from a third party to buy equity securities from such shareholder, to offer such securities first to the company and the investors, typically on substantially the same terms as those offered by the third party. The primary purpose of the “right of first refusal” is to provide the investors with the ability to keep the company’s capital stock within the existing ownership group and allow the investor to obtain greater control over the company, or prevent the transfer of control to non-strategic or hostile third parties.

Increasing liquidity of shares directly increases their value. As discussed above, the IRA (Investors’ Right Agreement) sets forth registration rights  – the rights of the investors to force the company to register their shares for public offering, therefore allowing for more liquidity of the shares to investors.

Protective provisions are a list of matters (such as merging the company, or implementing any fundamental changes in its business) that require special class voting rights. This is one of the main ways in which minority investors are able to control certain matters of particular significance to their investment.

Drag along right gives the investor the right to force other stockholders to sell their shares along with shares sold by the investor, typically when the investor wants to approve a transaction (such as a sale of the company) without restrictions from other equity holders that may sometimes have different interests than the investor.